Gardiner… proves herself wickedly adept with plot twists and turns... Plot twists and mounting suspense get people to race from the start of a book to the end, and complex characterizations and dynamic situations keep them coming back. Thanks to Meg Gardiner’s skill at both, her readers will be anxiously waiting, eager to devour whatever this talented writer comes up with next. 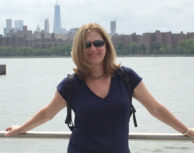 Why do you write thrillers? Because you have a twisted imagination?
Because thrillers—and mysteries, suspense novels, all of crime fiction—get to the heart of the human condition. They’re about people facing severe threats, or confronting some danger that has invaded their world, and discovering whether they can rise to the challenge.

Writing thrillers is also fun. I get to slingshot readers into situations they would hate to face in real life. A kid in danger? Bring it on. Sadistic killers? Here, have another helping. My book gave you nightmares? Thank you, that’s wonderful.

Any other reasons?
Yes. When I was younger I tried writing romance and science fiction, and those stories sucked. Sucked so hard, they created a vacuum on the opposite side of the planet.

The UNSUB series:
• UNSUB
• Into the Black Nowhere
• The Dark Corners of the Night

What does “UNSUB” mean?
It stands for Unknown Subject. The term originated as the FBI’s designation for an unidentified criminal who is being sought by law enforcement.

Are the UNSUB novels based on actual crimes?
They all draw from true crimes cases. The series is about Caitlin Hendrix, who hunts serial predators, first as a cop and then an FBI agent. Real crimes have provided the spark for each story: the Zodiac (UNSUB), Ted Bundy (Into the Black Nowhere), and the Night Stalker (the upcoming The Dark Corners of the Night.)

In Phantom Instinct, Detective Aiden Garrison suffers from Fregoli syndrome following a traumatic brain injury. Does such a condition exist in real life?
Fregoli syndrome causes the delusion that the person you’re looking at is actually someone else in disguise. It’s a form of face blindness, and is very real. For a cop, who thinks he sees the same enemy everywhere he looks, it’s a nightmare.

Harper Flynn, the heroine of Phantom Instinct, is a former thief. What kind of research did you carry out to make sure her skills are realistic?
I read about lock picking and evasive driving. That’s my story, and I’m sticking to it.

In The Shadow Tracer, Sarah Keller tracks down people who have gone on the run, and goes on the run herself. These days is it actually possible to disappear?
Disappearing in the age of Facebook and pervasive CCTV takes smarts, luck, and discipline. It is possible, but can be nail-biting. And in Sarah’s case, it’s dangerous.

Jo Beckett is a forensic psychiatrist. Does such a job actually exist?
Yes. Forensic psychiatrists actually perform psychological autopsies in cases of equivocal death, to determine whether a victim’s death is natural, accidental, suicide, or homicide.

Is Evan Delaney based on you?
No. We’re both from Santa Barbara, but Evan is more courageous and prone to trouble than I am. Unlike her, I’ve never chased a killer down the street while dressed as Diana Ross. Or stolen a Sidewinder missile. Or found an FBI agent hogtied to my bed, stark naked.

Is China Lake an actual location?
Yes. A history of the place is titled Secret City. Drive west from Las Vegas, skirt Area 51, cross Death Valley, and stop when the Marines shoot at your car. Eat at Denny’s.

I have an idea for a book, but I’m not a writer. Do you accept story ideas from other people?
I don’t. I need to come up with my own stories.

So where do your ideas come from?
Prophetic dreams.

No, seriously.
I start vicious rumors about my relatives, then sit back and watch the fur fly. After that, the books write themselves.

You’re starting to annoy me.
Oh, all right. Headlines. The human heart. My deepest fears. The inner voice that says: if it scares you, it’ll scare readers too.

I have written a book. Will you read my manuscript?
Sorry, no. On the advice of legal counsel, I won’t read unsolicited, unpublished works. Doing so only leads to grief.

You’re no help at all. Can you at least recommend some books on writing?
Here are three excellent ones:

Can you sum up one of your crime series in 100 words?
No—for that I defer to Nancy Freund Fraser of Gobreau Press: