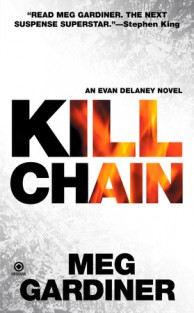 When Evan Delaney’s father disappears, the cops think he’s fled the country to avoid prosecution. But Evan is sure he’s been abducted or killed for reasons associated with his work for Naval Intelligence. As Evan hunts for clues, she’s attacked by an armed man. The attacker ends up dead and turns out to be a federal agent. Now Evan is on the run, implicated in his murder. And then she’s contacted by a sinister duo a madam and gigolo mother-and-son team who claim her father was mixed up in their very dirty business. Can Evan save her father’s reputation and his life?

Readers, friends, and folks who have stumbled randomly upon this website: test your knowledge of the heroine in Meg’s novels.

3) Evan’s favorite animal is the

9) Which of these things has she not found in her bed?

1. a lifesized inflatable doll
2. a naked FBI agent
3. a good night’s sleep, since finding the other two

1. Some things I do straight: drink, sex, bad news.
2. Getting wet has never thrilled me. Getting dirty is something else.
3. God. Whoa. Jeepers Creepers.

1. I hope not. Good Catholic girls don’t talk about sex.
2. Yes, it’s her answer to every question.
3. No. “That’s a paraphrase. My actual words involved blasphemy and animal sounds.”

Answer: Yes. But our quiz goes to eleven.

Answers to the other questions can be found in the books.